Purani Swami Gopinathdasji was possessing remarkable virtues who has rendered note worthy services for the Sampraday (holy fellowship). He was born at the village ‘Vankia’ in Saurashtra in the V.S. 1920. His name was Govindbhai. After the contact with Swami Balmukunddasji in Vankia temple, he left home and got initiation of saint under the care of Swami Dharmswarupdasji in the S.Y. 1934. He was a learned Sanskrit scholar with practical wisdom. Adbhutanand Swami had blessed him that he would become prominent amongst the learned persons. Accordingly, his contributed to prove Swaminarayan ‘sampraday’ (sect) as Vedic in the conference of ‘Panditas’ at ‘Kashi’ in the V.S. 1964 was highly abbreviated. In the recital (Parayans) of the religious scriptures, he was describing every event very lucidly and explaining the gist in sweet tone, simple words and in interesting manner, as a result of which number of people eagerly attended his discourses. 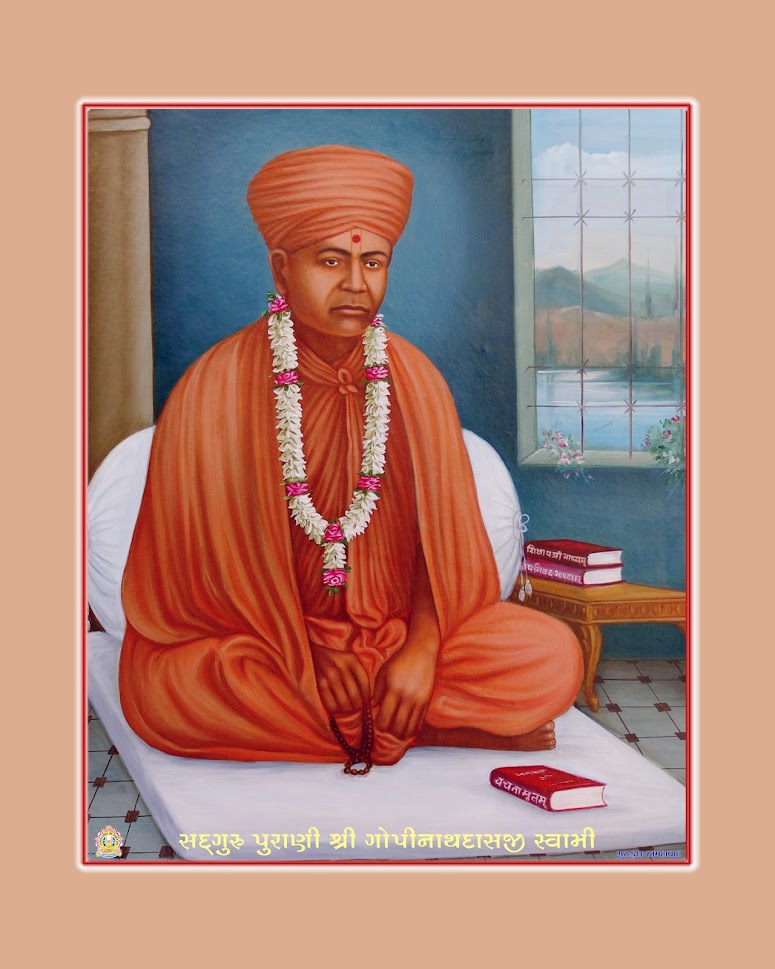 As per the desire of Balmukunddasji Swami & under his instructions, temples at Jetpur and other places were constructed, and many were renovated. Services for some necessities in Junagadh temple were rendered by him. In Gondal temple and ‘Akshar-Deri’ etc., he had done new construction works. He had put in practice the sermons of Bhagwan Swaminarayan, with the knowledge of His greatness. He was very kind hearted and by his blessings, the desires of many were fulfilled. Once he sat chanting the names of Bhagwan Swaminarayan with firm determination, and he had His actual holy darshan. When he left his physical body in the V.S. 1974 at Gondal, some saints witnessed his miraculous passing away from the world along with God in divine ‘Viman’(divine aeroplane).