Purani Swami Premprakashdasji was like the Living form of Love and Affection. He had love for God and affection for everybody. He was enlightening the path towards God and thus literally justifying his name- Premprakashdasji.

He was always cheerful, kind and transparent-hearted pious saint,
He was born in the village Khadkhad (Ta. Jetpur) and left home at the age of seven years and later on he was got initiated as a saint by Purani Swami Shree Keshavpriydasji. He had also received hearty blessings of Mahant Swami Shree Krushnajivandasji. 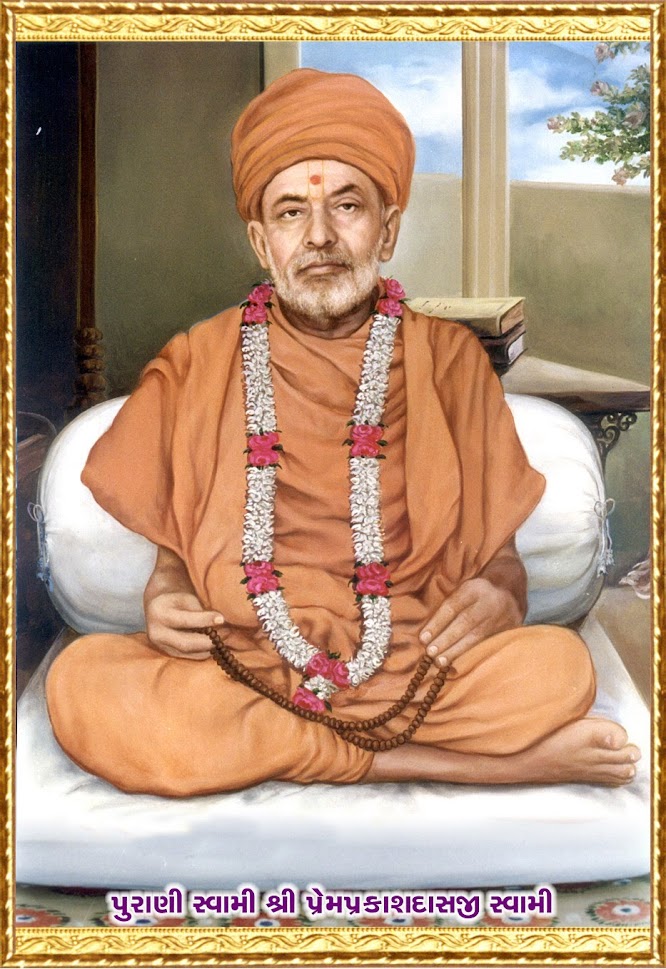 He came in touch with Pujya Shastri Maharaj ShgreeDarmajivandasji and joined the group of saints of Shastri Swami in about S.Y.2000.

He was a simple and serviceful saint with sober nature and saintly virtues.

From the beginning of Rajkot Gurukul, he firmly and sincerely stood by Shastri Maharaj. He suffered insults from narrow minded persons, still he never opposed but silently tolerated.

He was taking care of all the students of Rajkot Gurukul, as the superintendent of the boarding and was treating them with patron saintly. Hence the students had always revved high Regards for him. He was giving medicines to the students and also serving them with smile during their sickness.

He cultivated good virtues in the students and by constant care moulded their character. This was his greatest contribution in fulfilment of the aim of the Gurukul.

By his preaching many persons had left addictions and vices.

He did not like writing himself but he dictated many events of Bhagwan, Swaminarayan, saints and devotees in monthly "SADVIDYA”, which have been subsequently published as books namely ‘SATSANG – STORIES’.

He has a special style of description of any event in such a natural way that actual picture of the events is portraited before the listener or the reader.

He left the physical body in the V.S. 2041 (1985) and the holy fellowship lost a lively impressive orator, preacher and writer.