Founder of the Gurukul Parampara

The Guru-Shishya tradition is the unique feature of Sanatana Dharma, otherwise known as Hinduism. From the Guru the disciple directly receives the knowledge, capacity, virtues, ideologies, values and objectives of life, in a practical, personal and vibrant manner. The vision of Guru becomes the life and mission of Shishya. In such a divine lineage of Guru parampara of Swaminarayan Sampraday, appeared Sadguru Shatriji Maharaj Shree Dharmajivandasji Swami, a great versatile scholar and man of vision, a tough minded optimist and kind hearted Guru, a staunch advocate of Karma and Bhakti yoga and considered to be the Saint of the century by thousands of people of Gujarat. He founded the first Shree Swaminarayan Gurukul at Rajkot in the year 1948, with the intention of providing a value based education system to everyone, especially to the under-privileged. 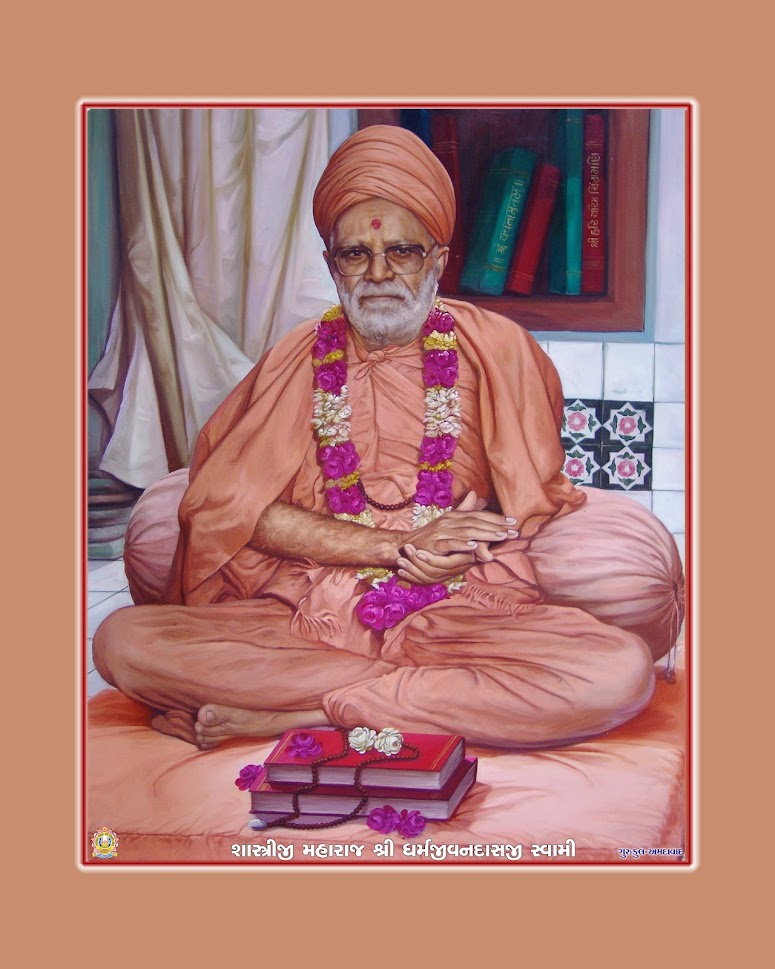 Born in the year 1901, on the auspicious day of the Rathayatra of Shree Jagannath Bhagawan of Puri, 18th June, to a humble farmer Shree Bhurabhai, in a small village Taravada on the banks of river Shetrunji, Amreli district of Saurashtra and was named as Arjan.  As a child, he was very brilliant and studious. Since his childhood, he had a natural attraction towards saints and sadhus, as he aspired to attend all the spiritual gatherings.  Even at the cost of sleep and food, he used to go and serve these saints at every opportunity he could find.  One such occasion changed his life forever.  He was privileged to receive divine blessings from Saint Shree Balmukundadasji.  This created a spiritual fire in his heart and a calling in his soul that shaped the journey for the rest of his divine life.

Being attracted by the pure and virtuous life led by the saints of Shree Swaminarayan Sampraday, Arjan started regularly attending Swaminarayan Satsangs.  At the tender age of 16, Arjan was convinced that the pure life of the Swaminarayan Saints was the optimal method of supreme spiritual realization and salvation.  Without hesitation, he took the vows of leading such a life and became a Saint. Arjan now became Sadhu Dharmajivandas.

His vision and mission of life started getting shape. He started studying Sanskrit and other spiritual scriptures as he regularly dwelled deep in to religious and philosophical studies under various renowned scholars.  In a profound effort to enlighten the rural masses, he started traveling to all the nearby villages to conduct regular spiritual assemblies.  He even attained the laurels & became the Mahant of Junagadh temple.

However, the routine rituals and monotonous life style was not acceptable to him.  He felt the need to incorporate a pertinent void from the social structure.  A void, if filled, would uplift whole society.  In order for this seemingly impossible task to be accomplished, he felt the scope of education to expand and incorporate spirituality. Schools, colleges, and universities may multiply in numbers, students may get Degrees, they may flourish in their worldly lives, but the fundamental ingredients to uplift society are lost out.  Unless devoted selfless persons with ideals practiced in life leads, the main purpose of education is vitiated.

Pondering over this, he went on a pilgrimage to Himalayas, where one day he saw a guru teaching his disciples, the Raghuvamsha of Kalidasa, one of the greatest poets of Sanskrit literature. This immediately struck his intellect and made him come to a realization that a value-based education system was the missing element in the society. The idea of rejuvenating the younger generation with modern education, complemented with spiritual principles of life, started taking shape and led to the creation of first Shree Swaminarayan Gurukul in the year 1948 at Rajkot.

The foundation stone was laid on an auspicious day, the Vasant Panchami, the 11th of May, 1948. On the 15th of August, 1960, the first school was started. Slowly the Gurukul tree started growing and two more Gurukuls at Junagadh and Ahmedabad were established before he attained the feet of the Almighty, on the 5th of February, 1988. Even after his departure to Akshardham, the power of his vision continued as establishment of more Gurukul-branches and centres in Gujarat, India and cross the globe. Till date, thousands of students have completed their high school and college studies from Gurukul and its branches.

Shree Dharmajivandasji Swami led a very simple life of devotion, compassion, spiritual inquiry and strong righteous principles.  This lifestyle had a major influence on his disciples as well. He led a very pious life of penance. He was able to sing more than 750 Kirtans, recite 3000 shlokas, and memorised all the 18 chapters of Bhagavad Gita in 18 days. He always emphasised the path of Bhakti and Dharma. Social welfare activities and betterment of the society were the pillars of his mission. He practiced a vow called Ayachak Vrat i.e., never to ask anyone for any money as donation. He had firm faith in God and believed that all the benevolent activities of the Gurukul should run only with the voluntary donations of the people inspired by the Almighty. This principle is still practiced as a vow by this Gurukul in all its activities. But his indomitable will power and staunch belief in the power of Bhagwan Shree Swaminarayan, brought him success in all his endeavors. Success for him was nothing other than the betterment of the society. Success for him was not a destination, but journey. In fact, his life became the source of inspiration to so many saints of other sects, that they too started creating huge institutions for education and social welfare activities.

His Himalayan vision, which transformed the lives of thousands of people, still continues and will continue forever through his disciples, who with the same missionary spirit and zeal, are striving hard for the betterment of the whole world.